My experiences with the dedicated, enthusiastic people I meet on Malta has switched me onto wild birds in a way I never expected. I now carry around binoculars and can bore my friends back in the UK just as well as those geeky bearded blokes I used to ridicule.

This year I joined the ringing station on Comino, where other international volunteers come each year to catch and release birds as part of a scientific programme. There is a great sense of relief when you step upon Comino: there is no traffic noise, no fumes or construction, and also when you see wild creatures you know they are not in immediate danger of being shot. Unlike the mainland, the landscape is mostly left in a natural state, with garrigue, maquis, sea caves and trees. It’s the perfect antidote to places on Malta like Delimara or Mzieb, where camo-wearing hunters have built towers every few metres in which they sit and look and wait to shoot the migrating birds.

And just off the island of Comino is the little island of Cominotto. You can swim across to it, where there is a small beach, and in summer it overlooks literally hundreds of sunbathers packed in amongst burger vans at the Blue Lagoon. I had never been before, and I have still not seen it in daylight. 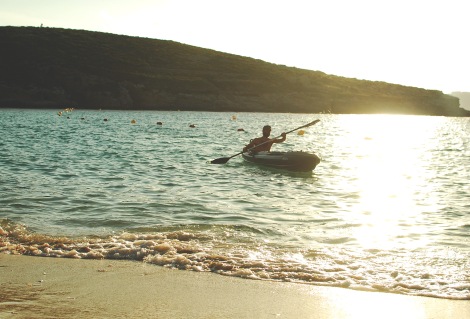 We paddled across in a kayak after sunset: or rather I was paddled across, in the passenger seat, with my trousers off to avoid getting them wet. The light was quite lovely, enough still – diffuse and refracted in the sky – to show up the cliffs which rise up above a perfect, female-shaped, cave. Paolo, Sarah and Ilaria had already gone over to the island, and taken up positions high above a cliff facing south, where I now followed Ben (my paddler pal and the lead ornithologist here). From our vantage point other Cominotto cliffs arced around, creating a pale curve of Maltese limestone to our left. It was fading by the minute. To the right, a stretch of black sea, beyond which werea few visible lights on the mainland: these got str
onger as the night got darker, so I had to avoid gazing that way because they fuzzed up my night vision.

There’s something you should know about Malta : it is an island of soft and crumbling rock, that is in a state of slow but constant collapse. When there is a strong storm, streams and road channels carry dust and detritus out to sea, forming a murky brown ring around the island. As we clambered down a little from the highest edge of the cliff, Paolo warned me where not to put any weight, that could not be trusted for even a hand’s weight of pressure. We stepped down on broken rocks which were balanced on more broken rock, all just temporarily paused during their crackling descent downhill. Earlier in the day, Paolo had explored this cliffedge and found shearwater footsteps in little caves and cracks that the birds burrow inside and use to raise their young. Shearwaters are not to be seen there in daylight – they spend the light hours out at sea, finding food and perhaps sitting out in great communal ‘rafts’ on the waves until it gets dark. Sometimes men go in boats and shoot them there. Sometimes they bring torches and shoot them off the cliffs, too. You can understand why these birds try their best to stay out of sight.

I was shown my cave. It was about 3 feet high, and perhaps 6 foot wide but uneven – more uneven in the ceiling than in the floor, which was handily quite flat. I had to curve into it, laying half my back upon the ground and scraping my head when I moved. A small hole – like a rabbit hole but quite hard to see in the dark – was in the back left corner, and another was in the back right corner. Both housed shearwater footprints. My task was to intercept any birds that flew in from the sea, their gullets full of fish, and to catch them before they scuttled down to feed their young. Shearwaters wait until the very darkest part of the night to return to their nests, so I was told to expect a good while of waiting. A little beneath me down the cliff was Sarah, stationed by a long horizontal crack with its own tell-tale footprints. To my right,  to collect the captured birds for processing, was Ilaria. Further on from her and out of sight were Ben and Paolo, by other caves.

We fell silent, and waited. The sea noise rose and fell, there was hardly any wind, and a ferry crossed over to our right, from Gozo. Ben says the most magical times really are when you are out there on your own, “although it is more dangerous”. You are just sitting there, expectant but still, waiting for the birds to decide the light is right for them to return – or maybe they won’t. High above the sea, alone, just waiting.

Until tonight, this site was unexplored: it was already known that shearwaters were present on Cominotto, but they had not yet been investigated with any effort. So maybe nothing much would appear, we didn’t know – until a dark shape materialised from the space in front of me and blatted me in the cheek. I had that moment of inept panic that I remember from subbing as a goalie in my friends’ old five-a-side games. I was a crap goalie, and I knew it, and this invisible dark bird had put me off balance and ran low in a straight line – fast waddling – past me to the cave on my right.

The incident had given me a spike of adrenaline, making me at once more nervous and more alert – so that I felt at the same time both more hopeless (the shit goalie) but also more capable (alright, I’m awake now, I know what they feel like when they come in).

I adjusted my position, rubbed my temple where I’d scraped it, and thought about the feeling of vertigo if I looked at the cliffs, or the waves that appeared in dark white crests below. I used to think I was scared of heights. My mum certainly is, and I think she passed a little of her fear onto me as a kid. I still have the occasional dream of plummeting down from a bridge or tower, and it’s an awful feeling. On very very rare and special occasions, none of which have occurred in recent years, I have been able to convert that plummeting feeling into a lucid dream of flying. And that swooping, gliding, dizzying headrush plummet-y dance is just incredible. There was even a time, after I’d had a series of these dreams, that I tried to engineer my eating, sleeping and thinking habits to manifest a repeat. It rarely worked, but just remembering them makes me want to try for those dreams again. The thrill of them must be somehow connected to the fear of falling : it is the dread that gives them their power, the feeling of relief from that feared fate.

I sat with both hands raised (the rubbish goalie), left leg stretched out to where there was a firm bit of rock, right leg sometimes cocked up, sometimes flat. My back never comfortable, the rock at my neck and that kept knocking on my crown quite sharp and grating. I wondered if wearing glasses gave me a handicap : would the birds sneak in around the edges, where my vision didn’t reach?

A faint sound of the birds flying: they must be gathering in the air near their cliff nests before landing. A faint streak of white as one goes into an unguarded cave to my left (shearwaters are dark from above, but white from below : you can watch them close against the waves in the daytime, flashing first white, then black). Shearwaters make famously eerie cries, which sound like shrieking unhappy babies. They have freaked out many a honeymooner or night wanderer before (especially as there’s no sign of them being around, in daylight). Another bird, landing with a soft thump by my leg. I try and grab it, miss and am too hesitant – I have blocked it from its cave but it is disconcerted, and flies off again.

Sarah climbs up, at a diagonal from beneath me to where Ilaria sits in her little hollow. She hands over a bird in a cloth bag and then steps carefully back below. Another flash of white somewhere off to my left. A red headtorch rounds the bend as Ben joins Ilaria for the measuring, the weighing and ringing of the first captured birds.

And bumph! My 3rd visitor and I pounce, less gently than before, and I have it. “I have it!” Ilaria crawls crabways over to me, places the bird in its bag – it’s a little larger than a pigeon, and with slightly oily feathers, both smooth and coarse (strong) at the same time. 2 : 1 in the football game. Then another brushes my elbow and gets into the same hole as before. “Crap!” 3 : 1

By this time the rocks beneath my butt were making a strange noise. When I adjusted position, relieving one buttock for the other or shifting stones from under my ankle, I listened down the tunnel to where I could hear the young birds calling in a wonderful kind of thankyou and bonding call to their parents. It sounds almost like a kitten that is calling to its mother just when it thought it had got lost. The sound of worry being relieved/ sound of parent and young/hard to give a comparison to, but lovely. It was a really sensational experience: the cliff itself seemed to make the noise. Hidden tunnels. Life behind the rock. Ffoomh! Another one goes down the left hand cave. Grab! I get one in a bag.

My final score was 6 : 5 : 3 : 1 : 1.
6 got past me, into their holes.
5 I caught, passing on to be ringed. One of these was at the very last moment, just as we were leaving.
3 tried to get to their holes but found me there, flailing at them on my back, and quite sensibly flew away again until I’d left.
To release them, we open the bags in front of their intended hole, and they shoot down. But 1, after being ringed, came out of its bag an unexpected way and flew away to sea. Oops.
And the last 1. That 1 popped out of the hole behind me to the left, and ran – sounding like a fat little dog – straight behind my back and down the other hole.

We have seen more birds than Ben and the team expected. Paolo is rightly glowing with the fact that this place was so full of life. In fact we are all glowing, although very little is said to each other. I am guided up the few feet to the clifftop, and then we follow the slope back down to the waters. Earlier, when we paddled across, we’d seen the remains of hundreds of blue vellella vellella. These are curious plastic-looking jellyfish which are non-stinging and sail into bays like this on the wind. Now, trousers off, bum wet, half-moon above and Paolo paddling me over, we catch glimpses of them floating in little groups, like they’re waiting for the sun to rise again. I step out, and my feet in sand get covered also in vellella vellella and I have to do a slow dance to wash them off. As I watch Paolo paddle back for the others, I realise in a quiet, lingering moment, that this has been one of those moments that make up a life. No need to engineer a lucid dream anymore: this is the real thing.