Researchers from the EU Life+ Malta Seabird Project today announced the first instance of a Yelkouan Shearwater (Garnija in Maltese) using an artificial nest box placed at one of this threatened seabirds breeding colonies on Malta’s inaccessible sea-cliffs. 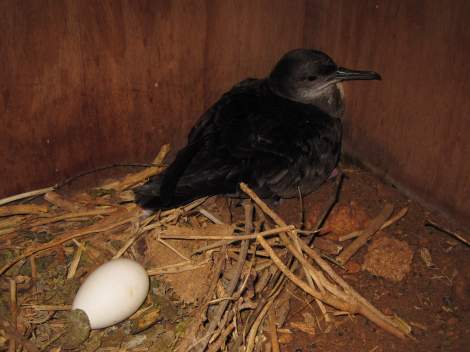 One of the adults from the first pair of Yelkouan Shearwaters to use an artificial nest box in the Maltese Islands. Photo by Dr Benjamin Metzger

Dr Benjamin Metzger, the Head Researcher on the project, says this first breeding attempt in a manmade nest has the potential to revolutionise the study of these birds during their breeding cycle: “Normally Yelkouans nest deep in the dark, narrow crevices and caves in the sea-facing cliffs around the islands, which makes their behaviour on their nest very difficult to observe.

But if more of these seabirds prove willing to take to nest boxes, it should make it possible for researchers to gain insights into previously unobserved aspects of their breeding ecology.

“What happens to the birds during this vital stage of their life-cycle is hugely important if we are to understand why their populations are in decline and what we can do to help them recover,” said Dr Metzger.

One of the main factors responsible for limiting the breeding success of Yelkouan Shearwaters throughout their range is predation, especially by introduced mammals, such as rats. The adult birds, which form long-term pairs, have only a single egg each year and if they lose it to predation, they will not lay another that year.

Malta is home to 10 per cent of the world breeding population of Yelkouan Shearwaters, which are listed as “Vulnerable” in the IUCN’s Red List of endangered species, making the protection of the birds at their breeding sites in the Maltese Islands of great importance to the conservation of the species globally. (1)

And nest boxes might also offer some hope there too.

“If we find that the birds will happily use artificial nest boxes and can successfully rear their chicks in these boxes, it opens up the possibility for establishing new breeding colonies in areas that otherwise lack suitable nest sites, in order to give the birds a much needed helping hand,” said Dr Metzger. “But of course, in the long run we need to tackle the root causes of their decline if we are to stop and even reverse it.”

Almost simultaneously, LIFE Montecristo 2010 (2), another EU-funded project looking at Yelkouan Shearwaters breeding in Tuscany Archipelago, Italy had a similar success trialling nest boxes for these birds. Together, these are the first examples of Yelkouans anywhere in the world using nest boxes.

As well as studying the ecology of Malta’s threatened seabirds at their breeding sites, the EU LIFE+ Malta Seabird Project aims to identify important areas for seabirds in Maltese waters and designate special protection areas at sea under EU nature conservation legislation. The Project is managed by BirdLife Malta with support from the Ministry for Sustainable Development, Environment and Climate Change (MSDEC), and BirdLife partners in the UK (RSPB) and Portugal (SPEA).

For anyone interested in finding out more about the enigmatic seabirds that breed on Malta’s remote sea-cliffs BirdLife Malta is organizing a Discover Seabirds! activity at the National Aquarium between 4.30 and 6.30pm on Wednesday 21st May 2014, as part of the Europe-wide Natura 2000 Day. Email events@birdlifemalta.org for more information and to book.

(1)  BirdLife International (2013) Species factsheet: Puffinus yelkouan. Downloaded from http://www.birdlife.org on 30/08/2013. Recommended citation for factsheets for more than one species: BirdLife International (2013) IUCN Red List for birds. Downloaded from http://www.birdlife.org on 30/08/2013.

“This species has been uplisted to Vulnerable as it is estimated to be undergoing a rapid population decline, caused by extremely low breeding success and adult survival owing to fisheries bycatch and predation by introduced mammals. Declines have probably been on-going for many years, and are projected to continue. The species may be declining more rapidly than this and should this be confirmed, the species will warrant uplisting to a higher threat category.”